The 2017 cyclocross season might have been the toughest race season that I have ever endured. I did a lot of traveling and raced in some of the biggest races in the Northeast. By the end of the season I was whopped. After the Bethlehem Cup, my plan was to just rest and recover until the first of the year. 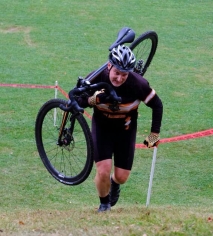 After gaining 13 pound in two weeks, I realized that a 6-7 week layoff was not going to work for me. My 12 week training plan that I designed for the off season was about to turn into a 16 week plan to shed the weight that I put on and to get ready for spring riding and racing. The plan is to do four days a week of interval training indoors on the trainer. Two days of HIITs and two days of sustained efforts. My goals are simple: lose weight to get lighter on the bike, and gain speed to get faster on the bike. I’m not too concerned about my endurance, that will be there, especially once the weather is warmer and I’m riding outside. In the first 6 weeks of training, not only did I drop the 13 pounds that I gained, I also lost an additional 7 pound for a total of 20 pounds in six weeks of interval training. Now I’m fluctuating between 162 and 165 lbs with my target race weight of 160 lbs so close.

I am also racing with a new club and team. I have joined the Capital Bicycle Racing Club (CBRC) out of Albany, NY. CBRC has been an active Albany racing club for many years. Riding and racing with CBRC will definitely improve myoverall racing.

My 2018 race plans are a full season of cyclocross racing from September through December. Any racing that I do prior to ‘cross season will be just a handful of road races. It will be strictly for fitness and preparation for cyclocross. My goals are to focus on staying health, no injury, and getting just a little bit faster.

During the last season, I really didn’t think that I would or even could race and travel again like I had. But with a strong off season of training, diet change, weight loss, medical improvements, etc, I feel the best that I have in many many years. And now, cyclocross season can’t get here soon enough.