Continental Collide to be released during the Great American Beer Festival 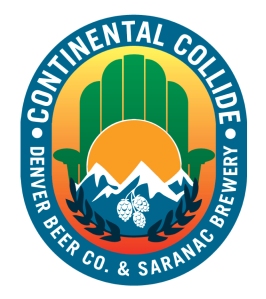 Denver, CO – America’s oldest craft brewery, the F.X. Matt Brewery of Utica, N.Y., brewer of Saranac beer, and Denver Beer Company of Denver, C.O., have teamed up to create Continental Collide, a collaborative brew with a little taste of each brewery’s hometown. It is being brewed at Denver Beer Co. with brewers from both breweries contributing to the final recipe.

Denver Beer Co.’s brewers both went to college in upstate New York at Colgate University, where they spent four years drinking Saranac Beer. This spring, at the SAVOR Beer and Food event in Washington, D.C., Nick Matt, chairman and CEO and Rich Michaels, product development manager from Saranac Brewery had a few beers with Patrick Crawford and Charlie Berger, co-founders and brewers from Denver Beer Co. After their third pint, Patrick and Charlie shared the story of Saranac’s influence on their appreciation for craft beer. Nick and Rich agreed that the two breweries’ mutual love for mountains, beer, barley and hops should lead to a collaboration beer.  And so, Continental Collide was born.

A collaborative brew to celebrate both the Adirondacks and the Rockies, this beer is the brainchild of the brewers at Denver Beer Co. and Saranac Brewery. An “East meets West” beer, this recipe features a mash of all Colorado malted barley and rye from the foot of the Rockies along with Galena and Cascade hops raised at the base of the Adirondacks at Wrobel Farms in Bridgewater, NY.  The result is a vermilion Rye IPA with a touch of Colorado honey to compliment the citrusy New York hops.

“Jokingly, we probably owe them this because of Charlie’s tattoo incident after a Saranac Brewery Tour in Utica a few years back,” said Rich.  “On a more serious note, we are excited to work with them because of our local connection from their college days in upstate N.Y. and the good times we have had with Charlie and Patrick (over a few pints) at events around the country.  It is a great opportunity to feature hops form New York’s Mohawk Valley and to work with small batch rye and barley malt from Colorado. It is exciting to see their success and we are honored have been an influence on their appreciation of craft beer and to have an opportunity to brew with them.”

A recent article from Craftbeer.com notes that collaboration beers are “usually of the highest quality since both brewers aim to impress the other and deliver their best.” Continental Collide is no exception. The F.X. Matt Brewery and Denver Beer Co. use the best local ingredients to craft their beers, so not only is Continental Collide a strong representation of New York and Colorado, but it also appeals to craft beer enthusiasts and casual beer drinkers looking for a unique beer to try.

Friends of Saranac in Utica, N.Y. can also say they had a hand in making this beer a reality.  In late August, 200 local volunteers helped the Brewery pick these special hops used in brewing Continental Collide as part of the second annual Saranac Hop Harvest. The crew picked 12 varieties of locally grown hops, including six different varieties of heirloom hops dating back to the 1800s.

Continental Collide will be released during the Great American Beer Festival at Denver Beer Co., 1695 Platte St, Denver, C.O. 80202.  Join the brewers of Saranac Brewery and Denver Beer Co. as they tap this collaboration beer at 4PM MST on Friday October 12, 2012.  Attendees will have the opportunity to chat with the brewers and learn first-hand about the inspiration and techniques that went into this cooperative brew. This will be the only chance to taste this beer.

Beer is Our Craft. More than a slogan, it’s the brewing philosophy that the Matt family has lived by for four generations. It’s an expression of the pride and passion that goes into each and every ounce of their distinctive and drinkable beers. Located in the foothills of the Adirondacks, F.X. Matt Brewing Company – America’s oldest craft brewery, New York’s oldest brewery and second oldest family-owned brewery in the United States – has a long tradition of taking pride in what it makes. That’s how this family-owned brewery has quietly earned its reputation as one of the country’s most respected makers of specialty beverages. To learn more about its award-winning Saranac family of beers and soft drinks, visit the brewery’s website at www.saranac.com.

Denver Beer Co. was born in Charlie and Patrick’s garages with a few batches of homebrew and a love for the craft of brewing. Serving only premium artisan ales and lagers, they utilize fresh ingredients and embrace both innovative and old world styles of beer. Similar to a farmer’s table, their beer selections change with the seasons. By brewing in small batches, they can ensure that a few old favorites are always on tap, but new goodies greet visitors each month.

The brewery is founded on passion for high quality, flavorfully crafted beer and the belief that the best pints are those shared with good company. Drawing inspiration from beer gardens of Bavaria, they designed Denver Beer Co. to be a place where new and old friends can share a table and pint out of doors.