Riding a Bike While Under the Influence

States and courts are split on the subject of drunk biking. Some people automatically doubt the amount of harm a bicyclist can cause to others, considering the nature of a bicycle. However, some states and their laws acknowledge that, even assuming a bicyclist likely only harms themselves by drunk biking, an injury to a drunken rider can have a profound effect on others, especially their family members. 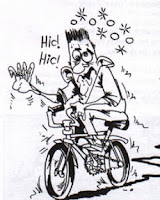 In any case involving an allegation of drunk bicycling, the first place to look to is the DUI/DWI law of that state. Some states exclude bicycles entirely from their definition of “vehicles.” Other states limit the application of their DUI or DWI laws to “motor vehicles.” But some states treat bicycles as just another vehicle on the road, regardless of the language used within their DUI laws. In these states, drunk bike riders face the same potential legal landmines as any other drunk driver.

In general, where a state law on drunk driving specifically prohibits the operation of a “motor vehicle,” the chances are very high that the law will be interpreted by courts as not applying to bicycles or similar man-powered vehicles. On the other hand, where statutes apply more generally to all “vehicles,” courts sometimes find that bicycles fall into this category. A local attorney can be of valuable assistance in finding out what, if any laws, apply in these circumstances, and can determine whether or not courts in the area have applied state DUI laws to cyclists. Or, just don’t do it.

This entry was posted in Uncategorized and tagged bicycle, biking, cycling, legal, riding. Bookmark the permalink.